While I was in Kelowna, BC several weeks ago, I went apricot picking for the very first time in my life! I have to say, it is so much easier picking apricots than strawberries. For one, apricots grow on trees, which means they are more easily accessible from a standing position and the trees provide shade. Strawberries, as delicious as they are, grow very low to the ground in large open fields with little shade. As a side note, in high school, I worked picking strawberries for one damp morning and since then, have a huge appreciation for berry pickers. Oh yes. And apricots are much larger than strawberries…we picked over 20lb of apricots in 10 minutes! To eat tree-ripened apricots…heaven.

Unfortunately, I missed cherry picking (arriving too late in the afternoon to be allowed into the orchards) and couldn’t go blueberry picking while in BC (because BC blueberries are huge and the best of the best). However, I did eat loads of Okanagan cherries during my vacation and decided that I would try blueberry picking in Ottawa once I was back in town.

It doesn’t seem like there are many blueberry U-Pick farms around Ottawa but we made a trip out to the one that I did find: Canaan Blueberries. It’s about a 20 minute drive east on the highway from downtown Ottawa, beyond suburban Orleans and into the countryside. The drive is nice and takes you along the Ottawa River, and before you know it, you’ll have arrived at the farm.

I found that blueberry picking in Ottawa was more tedious than picking in Vancouver, mostly because the berries here seem to be smaller. Obviously this depends on the variety, of which Canaan has a few, but it took me about 2 hours to fill a 4 litre basket ($2.75 per lb). Nonetheless, it was a beautiful summer day to be out amongst the blueberry bushes!

It is such a luxury to – instead of sitting at a computer in an office cubicle – be able to go for light hikes in the morning through beautiful forest of coniferous trees and rivers. Hearing birds talking. Feeling the dirt trail beneath your feet. Smelling the fruity air, thanks to the ripening berries on the bushes.

Ah the beauty of a vacation in beautiful British Columbia!

You may have heard of the Capilano Suspension Bridge, which is a very popular (paid) tourist attraction in North Vancouver. However, there is a little gem in the Lynn Valley neighbourhood of North Vancouver called the Lynn Valley Suspension Bridge. It isn’t as long as the Capilano bridge but it feels less touristy, is still quite impressive and well-maintained, has a good network of trails surrounding it, and is free!

Just north of the Capilano Suspension Bridge is Cleveland Dam and the salmon hatchery. The Capilano Pacific Trail is one of the major trails linking all 3 places; you can actually walk all the way from Ambleside Park (by Lions Gate Bridge) in West Vancouver via this trail all the way north to Cleveland Dam near the base of Grouse Mountain.

If you walk on the east side of the Capilano River, either down from the Capilano Dam or up from the Capilano Suspension Bridge, you can visit the Salmon Hatchery. I remember going here on school field trips to learn about the lifecycle of fish and it’s still well-maintained years later.

One awesome summertime activity is watching a movie outdoors. Many cities across Canada host free movies in the park or on the pier (yay Halifax!), and Ottawa is not to be left out. Centretown Movies is a volunteer-driven film fest that screens family-friendly films at Dundonald Park in downtown Ottawa, both to bring the community together for evenings of fun and to take back a park that used to be a bit rough. The films are pay-what-you-can (pass-the-bucket style) and last year, there were two food vendors who serviced the event. Enjoy a picnic dinner on a Friday or Saturday evening then enjoy the movie once dusk sets in.

Click here to see the schedule. The first movies start July 26/27. However, I did want to highlight one very enjoyable film that I saw at the local independent theatre, Bytowne Cinemas. It’s called Jiro Dreams of Sushi and the story is great, the cinematography is great, and I definitely recommend seeing it. I wrote about it here but don’t worry, it isn’t a spoiler. The film is playing on Friday August 9. A recipe for a perfect summer evening!

This past winter, right after a heavy snowfall, we went snowshoeing at Mer Bleu Bog. The boardwalk was nowhere to be seen and it was a serene white all around us. We decided to venture back there on a beautiful sunny late Spring afternoon to see what it looks like when the snow has disappeared.

Now that I’ve seen the bog in the dead of winter and in late spring, perhaps this means I’ll need to take a visit later this year during fall as well. Hmmm.

Three years ago, a colleague told me about the Mer Bleue Conservation Area. This is a large bog just a short drive from the city center but for some reason, I only made it out to Mer Bleue just recently. There is a boardwalk that takes you through the bog and has interpretative panels that teach you about the different aspects of bog formation and habitat. I strategically chose the day after a snowfall to visit Mer Bleue, so I couldn’t see much of the habitat that was hidden beneath the snow but it was nonetheless beautiful. The boardwalk loop is pretty short (30 minute walk) and I’m definitely going to make a point of getting out to Mer Bleue after the snow has melted.

From the picnic table photo below, you can see how much fresh snow had just fallen the day before. We were the second set of snowshoers and just followed the tracks of the previous couple through the boardwalk area but enjoyed a lot of powder on the way in. We were the only people in the area for most of our snowshoeing trek: amazing serenity and a chance to enjoy the beauty at leisure. 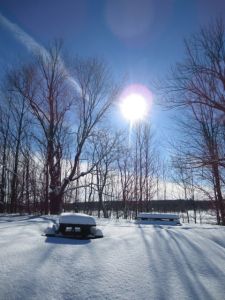 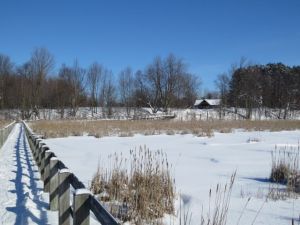 Our first snowshoeing adventure for this season (and for 2 years really, since we didn’t go at all last year due to the unusually mild weather) was to Bruce Pit in Ottawa. This is a remediated sand/gravel pit that is now a huge off-leash dog park and provides cross-country trails and toboggan hills in the winter. We snowshoed around the perimeter of the Pit making for a fairly easy, flat 5K loop. It felt great being back on snowshoes! 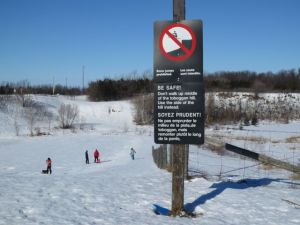 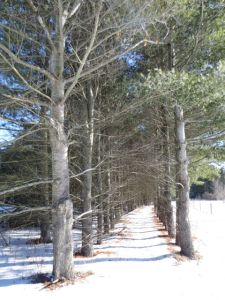 If you’re interested in city and community planning, the City of Ottawa has an open house and presentation in the evening on Tuesday January 29 for its Building a Liveable Ottawa Plan. This is the start of their strategic review of planning, development, and transportation policies and priorities. Straight from their website, the city has identified 12 planning issues:

I like what I’m seeing so far, with a decreasing emphasis on cars and more thought being put to how to make it easier for people on foot, bikes, and public transportation to get from point A to B in an efficient, safe manner. So far, so good.

This is absolutely exciting. The City of Ottawa is accepting applications for 20 more street food vendors. There is an info session this Wednesday November 28 for applicants and applications are due January 4, 2013. They encourage ethnically diverse food options that utilize fresh, local ingredients.

After spending the summer eating tons of street food in San Francisco, Portland, Seattle, Vancouver, Winnipeg, and Ottawa, I have a few ideas for what the Ottawa street food scene could use…but I don’t think I’ll be putting an application in this year. Granted, this could be a life-changing opportunity for me!

I am SO looking forward to what 20 more licenses could mean for Ottawa!!

A little summer beauty for a Monday morning:

I had never before attended Feast of Fields but figured that I should give it a go this year. The Ottawa chapter of the Canadian Organic Growers hosts this event, which teams farmers with local chefs to create small dishes featuring the farmers’ products. I think it’s a great opportunity for farmers to be able to show off their produce outside of a farmers’ market or CSA box and for chefs to show their hand at creativity. Over the past few years, the location for the event has changed and this year, it was appropriately held at the Canada Agriculture Museum in the Central Experimental Farm. There were 21 teams “competing” for fun titles like best dish and best decorations. There was also on-site entertainment; it’s fabulous eating lunch on a hay bale listening to aboriginal drumming (and singing)!

Welcome to my blog, where I write mostly about food and my travels. I live in Ottawa, Ontario, Canada.